Every traveler has sacred places.  For me, they’re the ones where I, upon arriving for the first time, feel compelled to stand still and look around in recognition.  I get a grounded feeling that tells me, “Yes, you could belong here.”

In Paris and Key West, this is a seductive whisper, easily dismissed with deprecating gesture and rueful laugh as impractical.  In others, like Denali and Southport Island, I am powerless as the soles of my feet latch on to the earth beneath them.  While I am immobilized by this magnetism, an intricate system breaks through to follow my veins.  It courses upward along my spine, and then unfolds to burst from my outstretched arms, blossoming from my fingers toward the sky.  Somehow, in these places I discover I have roots, and I belong to them.

The shores of Lake Superior

are sacred in this way to me, as they are to others.  Immortalized in Longellow’s Song of Hiawatha, Gitchigumi (Big Water) was named by the Ojibwe.  Their ancestors have hunted, traded, fished and mined the Great Lakes for 10,000 years.  Forcing out other peoples such as the Sioux and Iroquois, the Ojibwe were positioned in the mid-18th century to capitalize as middlemen on the region’s rich resources.

Anishnaabe Chi Gaming (Ojibwe’s Ocean) led to inland trails where trappers disappeared for months between ice in and ice out.  Emerging heavily laden with pelts at season’s end, woodsmen rendezvoused at places like Grand Portage and Sault Ste. Marie with agents of the North West Company.  Newly flush with cash, avid traders celebrated their year’s work before going in again.

Northeast Minnesota’s Cook County remains a gateway from which you can go all in to the wilderness from the shores of Gitchigumi.  There are four main interior roadways that carve the county into sections, scratching the bedrock like a line from an arrow or knife’s point.  These modern Trails are built on top of the trappers’ routes inland to what is now the protected Boundary Waters Wilderness.

The two most southerly Trails are the Sawbill and the Caribou, originating within a ten mile stretch between Tofte and Lutsen, before proper townships give way to the remainder of the county’s million acres.  The northernmost is the Arrowhead out of Hovland.  These three start out with sturdy paving, but quickly change to packed earth in a matter of minutes.  They fade to nothing at romantic points like Little Johns Crossing and Carbine Road, or The Grade between the Cascade Lakes north of Babble.

Of the four, the Gunflint Trail, out of Grand Marais, goes the deepest.  Purposefully plunging almost 60 miles inland from Big Water, the Gunflint skirts and teases the Canadian border before diving deeper within the wild places, only to abruptly end at an outcropping of rock over an inlet to Saganaga Lake.  This journey reveals our paradise, my sacred place. 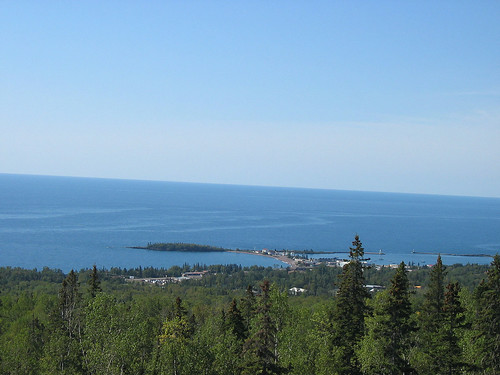 Climbing several hundred feet almost immediately from the village harbor, a backward glance from the Gunflint toward Grand Marais displays the splendor of the Ojibwe’s Ocean.  Grand Marais is the only incorporated municipality in Cook County, has its only traffic light, and with a census of about 1100, accounts for approximately 20% of the County’s permanent residents.  Almost immediately, the Gunflint’s first major bend will conceal this vista and recognizable civilization.

“To plunge” is defined as “to penetrate or enter quickly and forcibly,” and so the Gunflint casts us abruptly into the wilderness.  Recently named a National Scenic Byway, the Gunflint Trail’s route is through an overlay of national and state forest preserves, culminating in a portal to the Boundary Waters.

The further in we get, the more wonderful I feel.  Along this journey are favorite points I can tick off on the fingers of my hand, as well as vistas that confirm the scarring and upheaval from glacial activity over 11,000 years ago.  Each is a piece of patchwork in my tapestry of knowing that here is where I belong.

A city slicker’s first impression might be that there’s a whole lotta nothin’ going on along the Trail.  Even though thousands of visitors arrive along the North Shore each year, Gunflint residents fiercely guard this fallacy.  Wearing my Gunflint Trail sweatshirt, I have been accosted by strangers in places as far away as Boston and Appalachicola, who admonish me for publicizing.  “Don’t wear that!” they’ll plaintively plead.  The bartenders at our favorite watering holes in Grand Marais will bemoan the influx of “trustafarians” – those members of the Lucky Sperm Club who made their money the old-fashioned way by inheriting it and have no sense whatsoever – that descend upon the wilderness with high-falutin’ we-know-what’s-best-for-you ideas.

Cook County’s landscape is harshly framed, not only by the seasons, but by geological characteristics such as rock formations scraped clean by prehistoric ice movement, and high peaks comprised of glacial flotsam.  Regular rejuvenation occurs via the elements of fire and wind.  Forest fires and mighty “blowdowns” identified by year (e.g., “the 1999 blowdown”) cull the old growth and replenish the soil to support the new. 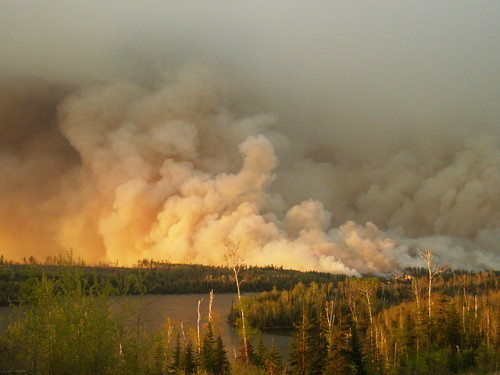 In 2007, the Ham Lake fire, whose smoke could be seen from space, devastated the northern shore of Gunflint Lake, skipped across the trail to burn in the Poplar Lake area, and then was finally arrested through the combined efforts of local volunteers and professionals flown in from other regions of the country.  Fire-fighting, we learned, is an equal opportunity volunteer position, as evidenced by co-ed teams, all members brawny and determined.  Boy or girl is of no matter when your home is endangered.

On one of our visits, the summer after the Ham Lake fire, whose effects revealed veins of bedrock like white gashes through the blackened landscape, we witnessed this timeless renewal first hand.  Pete’s photo reveals new growth arising from the ashes here just a few months later, proving the phoenix-like qualities of the Gunflint’s ecosystem.

Just past the George Washington Forest between Mile 11 and 12 is the turn-off to Trout Lake.  It is here that we routinely commandeer a wooden fishing platform and fish the day away.  We’ve been lucky on some days to catch enough for our supper.  Other days, not so much.  If it’s a not-s0-much day, we’ll continue down the trail.

Around Mile 22, we stop and turn left into a small dirt parking lot.  We’re looking for moose.  An easy path makes a loop up a hillside and then down into a small remaining Boreal forest where another handy platform has been constructed overlooking marshland.  We’re told moose are “always” in the vicinity.  Right.  Pete’s photo at left documents our closest encounter with a moose in this area.  Perhaps the forest has eyes and sees us coming in time to leave us its own kind of road apple harvest, eh? of an old sawmill and logging camp on Poplar Lake, around Mile 29, stands the Trail Center Lodge.  Started by hardy Finns in 1938 out of a logging boom that began further inland in the 1920’s, the sawmill operation spawned a community numbering in the hundreds.  These days it’s a popular stop midway down the Trail.

Photos like these remind me why the Trail Center area is my kind of place!  When life can be harsh it helps to have a sense of humor, no?  😀

The Trail Center is home to visual whimsy of all kinds, as evidenced by its own Easter Island-like garden statuary.  Pete thinks this is an Indian totem.  Umm, no, honey.  I’d say this was a tribute to Kim Basinger’s lips or something.

Here we have a living memorial to the Energy Crisis.  Remember when it was normal for country and wilderness folk to have their own gas pumps?  This is what you might call a re-purposed visual reminder of the ineffectuality of government policy.  Or maybe all these people should convert to hybrids?  Let’s see somebody put tire studs on their Prius up here.  That would be funnier than the guy who won the long underwear contest.  😀

And this particular building has been responsible for some of Pete’s best sales in his Zazzle store.  He made it into a “We’ve Moved” greeting card.  Would you buy a cone from these people?  This is some serious folk art here!  Not to mention the sun umbrella for UV protection.  They’ve thought of it all!  Come on over, pull up a chair and sit a spell!

When we have an off day at the Trout Lake fishing platform, we can always run across the street from the Trail Center Bar (voted a best bar in America by Esquire, don’tcha know) to the Ugly Baby Bait store to replenish our supply.  Ugly Baby’s proprietor, who actually grew up to be quite handsome, is livin’ my dream on the Gunflint Trail.  A couple of years ago, he just off and packed up his family from the Twin Cities and moved them up here, seeking a peaceful, more grounded life.  I know!  I’m so jealous!  Here we are on their porch.

Now that we’ve stopped halfway up the Trail, we’re not going to go anywhere without eating.  And we’re going to swap some stories with whoever we meet inside the bar.  Last time, our barkeep was a lovely woman from Jamaica.  When we asked her what she was doing all the way up in the wilderness, she replied, “I’ve got absolutely no idea.  When I got here, it was so cold, I couldn’t breathe!”  “When was that?” we wondered.  “May 1st” was the reply.  LOL!

We’ll leave you til next time when we travel up the rest of the Trail.  In the meantime,  enjoy some tastes of the Trail in these videos: