We’re back from our days hanging around the Minnesota North Shore and inland among forests and Boundary Waters.  And although it doesn’t seem like we’ve been gone that long at all, things are very different. You’ll remember we packed up and left for reasons of mental respite.  We intended to take stock and envision how the next was going to take shape. And in and amongst the fun of exploring, enjoying traditional events in the Grands (Marais and Portage, along the shores of Lake Superior), and on the Trails and trails, we managed just that.  I’m going to tell the stories about how everything all happened, but not all at once, because there is still very much to think about and sort out.

When we get up in those parts it’s a must to wander way back off the grid via primitive access just to see what we might encounter.  Both of us had felt heavy with emotions and burdens of the psyche when we set out on this trip, but as the days passed the rawness began to wane.

A favorite spot of ours is a Forest Service helipad overlook high up over the Pigeon River, which forms the Minnesota Canadian border.  This is one of several staging areas in Cook County for firefighters and their equipment to be flown and dropped in when the wilderness sets ablaze.  The helipad excursion was something we could fit in before we headed up to the Grand Portage Rendezvous during the final weekend of our stay. Pete wanted to get a better shot of the view than he had last time and I was happy to go along to see as far as I could see.

Otter Lake Forestry Road rambles off the Arrowhead Trail past its namesake in an easterly direction toward the Grand Portage Indian Reservation, skirting Superior National Forest and Swamp River Wildlife Management Area.  There’s a turn to the left after about 10 miles of this rambling, where you head north to the border and the helipad site.  Fortunately, this turn-off is easily found.  Continue too far east toward the Grand Portage Reservation line and you are admonished by posted threats; it’s a Federal offense to trespass on Indian lands without a permit.

It was a blustery morning, and the hot summer temperatures had blissfully cooled.  The shadows of cloud formations raced ahead of us, dappling and bathing the world in light and shadow.  New growth in these forests, appearing after events triggered by man and nature alike in the form of cutting and fire, tends to be dense.  It can feel like a close embrace on either side of the Jeep.

There is the unmistakable tinkling music of branches, twigs and leaves brushing against your vehicle as you pass through.  To me, this sound is as peaceful as a windchime or a carillon in the distance.  I like to venture through these enclosed places with the window down and my arm resting lightly on its frame.

Somewhere before the turn northward we were traveling through such a place, filled with the brightness of the sun against the silver undersides of the leaves as they turned in the wind.  We were coming upon a break in the young, dense woods: a clearing on either side.  We slowed in anticipation, for in these types of places it’s easy to glimpse a critter or two. 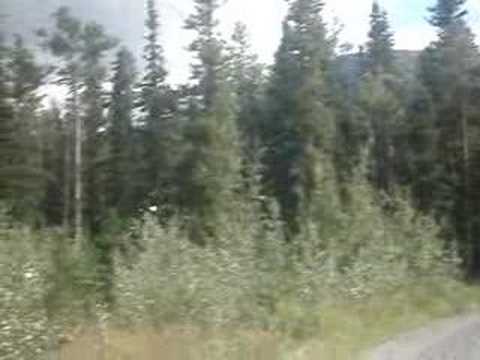 Just as the Jeep’s hood crossed the line of the clearing, flying past in a slow-mo dream-like happenstance, an enormous bald eagle crossed our path. Within ten feet in front of us, and no higher than six feet off the ground – much closer than the video I found online to try and show you here.  So close, we could hear the languid whooshing sound of his magnificent wingspan as it displaced the air. So close as to notice his puffy white-feathered legs with strong yellow talons that could have scratched the front grill or put out a headlight.  So close as to arrest our breathing and beating hearts.  The curve of his beak and a glimpse of a fierce eye.  No more than three whooshes from right to left across our field of vision, and he was gone.

Did that really just happen? We were frozen, motionless, pondering.  Slowly we drove into the clearing, and looked in vain to see where the eagle had disappeared.

Now, we’ve both been fortunate to have seen bald eagles many times in the wild, soaring about over open land – even in the Twin Cities metro area, migrating down the Mississippi Flyway along Hawk Ridge in Duluth, nesting close to the Wuebker cabin on Woman Lake, and even on a caretaker’s leather-wrapped arm at the National Eagle Center.  But never like this.  This was such a magnificent experience that we took it for a sign. Of what, we had no idea.

It was glorious to gaze from the helipad, looking northward into Canada, watching cloud patterns shift and fade as they raced across miles of forests.  This is the view I could imagine the eagle sees: a world filled with possibility, updrafts and downdrafts, alternating shadow and light, a world in which to survey, target, feast, perch and soar.  My husband made the shot he had been waiting over a year to get and it was time to head on.

Our dear friend Hinda (who writes the Living Your Intention newsletter, which I heartily recommend), is a person who recognizes meaning in many things.  When I told her the story of the eagle, and other signs we encountered, she said, “I will send you what I know about what it all means.”  Hinda wrote to me quickly: “The Eagle: symbol of spiritual power and illumination; their energy is healing and aids in creation.”

The Ancients believed there is meaning to be derived when we encounter members of the animal kingdom, and the eagle symbolically appears across many beliefs and philosophies:  The Eagle represents spiritual protection, carries prayers, and brings strength, courage, wisdom, illumination of spirit, healing, creation, and a knowledge of magic. The eagle has an ability to see hidden spiritual truths, rising above the material to see the spiritual. The eagle has an ability to see the overall pattern, and the connection to spirit guides and teachers. The eagle represents great power and balance, dignity with grace, a connection with higher truths, intuition and a creative spirit grace achieved through knowledge and hard work. – Eagle Spirit Ministry

We had come north seeking guidance and answers as we connected with nature, intending to look into our forever.  It seems that this was acknowledged and affirmed.