I spent a few days last week with my Uncle Jack, my late mother’s oldest brother, at the tail end of a longer trip visiting family.  Jack and his late wife retired years ago to Suttons Bay, in Leelanau County, Michigan.  They had grown up sailing on Lake Huron out of Alpena.  Grand Traverse Bay proved a fine day’s outing on the water, as well as a peaceful easterly view from their new home.

Both my Uncle Jack and my cousin Joan participated in sailing a two-masted schooner, the Inland Seas, which is now used for educational purposes, into its new berth in Suttons Bay Marina, where Joan lived summers aboard a small sailboat with her then-husband and young son.  When you live in Leelanau County, you’re never far from the water, and that suited everyone just fine.

If you’re raised in the Lower Peninsula of Michigan like I was, or if you live there now, you’re used to illustrating any kind of whereabouts by holding your hand up to replicate the mitten.  Collectively, Lower Peninsula residents have been referred to as “trolls” by Yoopers (those residing in the U.P., Upper Peninsula), because, of course, we live under the (Mackinac) Bridge.  Whatever.   Saginaw, we’ll show you, is in the thumb and forefinger’s crotch.  Detroit is the fleshy part between the thumb and wrist, Alpena is at the tip of the index finger, and Leelanau County is the pinky.  The upper part of the mitten is referred to as Northern Michigan.  All of this seems very confusing trying to explain it.  I guess that’s why we talk with the hand.  🙂 Leelanau County is a peninsula within a peninsula.  The scenery and terrain combine with history to create a romantic and magical experience.  Equal parts charming and elegant, windswept and harshly beautiful, sheltered and exposed, Leelanau is home to sailors, fishermen, farmers, artisans, naturalists, vintners, lighthouse keepers and Native Americans.  Its villages appear untouched by modern sprawl, hearkening back to a simpler time when screen doors slammed in the summertime, and sleighbells jingled in fresh snowfall.

Prior to the middle of the 19th century, Leelanau County was home to the Anishinaabek for thousands of years.  Their site tells of how they, who knew themselves simply as “The People,” were named by the white man:

We have always been a nation, and we knew one another as the Anishinaabek. It was not until the French and European settlers arrived on this part of the continent that we became known as the tribes now called Ojibwe, Odawa and Bodwe’aadamiinh. I heard an elder speak about this in his teachings. . . Sure enough, the day arrived when a ship brought people. These people knew very little of our culture and language. They asked if they could meet with the elders, and so the meeting began. Shortly after the meeting began, a group of men got up and left. The settlers asked, “What are they doing?” although they thought they were asking, “Who are they?” So we told them what they were doing. They were going to build lodges: the Ojibwek. The meeting went on and another group of men got up and left, and again the same question was asked. We told them they were going to trade: the Odawak. Now remember, they could not speak our language very well, nor did we understand their language very well. After the meeting ended, the settlers saw young men picking up firewood and putting wood in the fire. The same question was asked, and we answered that they were the fire keepers: the Bodwe’aadamiinhk. History moves on a few hundred years, and now we find out in the history books that the native people of the Great Lakes area are known as the Chippewa [Ojibwe or Ojibwa], the Ottawa and the Pottawattamii.

Uncle Jack, my cousin Joan and I visited the Eyaawing Museum and Cultural Center in Peshawbestown, just north of Suttons Bay.  Eyaawing means “who we are” in the Anishinaabemowin language, and the building is spiritually designed using sacred colors and symbols.  Sited so its entrance is oriented toward the sunrise over Grand Traverse Bay, the center features exhibits, books and art that reflect the native culture and history. Click the photo to enlarge and see how beautiful this building is. Jack wanted us to see the centerpiece of the museum:  two eagles forever locked in battle.  It is believed the pair were in combat and flew into a power line.  Their talons were still intertwined when they fell.  Other exhibits were fascinating: an ancient wooden dugout canoe unearthed from the shallows along the shoreline, regalia worn for pow-wow, and a medicine wheel representing the seven sacred directions and the teachings of the Seven Grandfathers.

Driving along the shoreline just past the museum in Peshawbestown toward Omena, we spotted a small hand-lettered sign, “Fresh Fish.”  Down a small path we encountered some young men from the tribe who had been out on the bay earlier in the day with their nets.  One of them expertly filleted and iced two whitefish, which Joan later broiled with butter, lemon and rosemary.

Leelanau County may be best known for Sleeping Bear Dunes National Lakeshore, one of two designated in the state of Michigan.  (We visited the other, Pictured Rocks National Lakeshore out of Munising, last year in this post and gallery).

Native legend has it that the dunes came to be as a mother bear and her two cubs swam eastward across Lake Michigan.  The cubs, tiring before they reached the shore, were turned by the Great Spirit into North and South Manitou Islands.  The grieving mother bear rests forever under the sands, which the wind sent by the Great Spirit blew to cover her.  Kathy-Jo Wargin has written a lovely children’s book, Legend of the Sleeping Bear that tells the story.

A gravity-defying bound down the 110 foot drop of the main dune toward the water is a favorite childhood memory of mine.  One of the prettiest beaches on Lake Michigan shoreline and an impossibly beautiful Glen Lake have been shaped by geological force along the 31 mile stretch of protected shore.  Glacial cliffs and moraines provide spectacular vistas among the over 100 miles of hiking and cross-country skiing trails.  The so-called “Lake Effect” brings lots of snow to West Michigan, so winter sports and activities abound in Leelanau. Each village in Leelanau County has its own special character.  Suttons Bay, where Uncle Jack lives, is a short jaunt up M22 from Traverse City to gallery hop and shop for avant garde clothing.  The Manitou Islands Memorial Society has as its mission the preservation of the former boom town on South Manitou, where steamships stopped for farming, fishing and timber.  Fishtown at Leland is the commercial fishing village comprised of grey shanties clustered around docks and drying nets.  The Fishtown Preservation Society purchased most of the buildings and has begun preservation efforts conjoined with retail outlets on site to preserve the character and flavor by using historic guidelines and repairing tugboats into working shape. 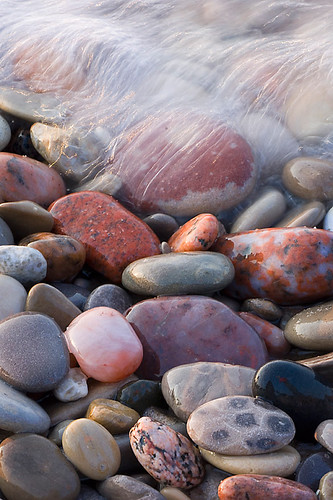 Michigan’s state stone, the Petoskey stone, is a fossil comprised of interlocking hexagonal chambers.  Each chamber, called an eye, represents a coral’s mouth.  When the coral was alive, it drew in plankton via tentacles around the eye.  Petoskey stones were very common along the beaches of Lake Michigan when I was a kid.  Winter storms still fling them on the beaches of Lake Michigan, but to a lesser extent.  Looking for Petoskey stones in Leelanau is like looking for shells on Sanibel.  Everyone does it!

The fruits of Leelanau are primarily cherries and grapes.  More tart cherries are grown in Leelanau County than any other county in the United States.  Half of all Michigan sweet cherries are grown in Leelanau County as well.  Farms in Leelanau county employ more than 1200 people and bring in over $30 million each year in direct processing, and an additional $20 million in processing.  Truck farms in Leelanau provide fruits and vegetables in abundance – asparagus, peas, rhubarb, radishes, salad vegetables, fruits, peas, berries apples and pumpkins.  On my way to Uncle Jack’s, I stopped at a roadside market.  The young children manning the stand introduced me to a sugar tomato, a small yellow tomato as sweet as I’d ever tasted.  The 9 year old proudly informed me he’d just picked it, and advised washing the rest when I got them home. 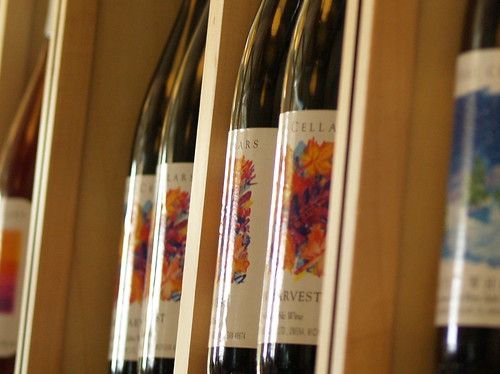 Leelanau is also a significant wine producing region.   Cool weather grapes thrive in Leelanau’s “terroir.”  In the spring, the cooling Lake Effect from Lake Michigan prevents the wines against growth until after the final frost.  Then the warmth of summer is stored in the lake, and emanates onto the land, moderating temperature extremes from day to night.  Lake Effect snows insulate the vines in winter.  Leelanau has over 1000 acres planted in vines today.  One of our favorites is “Winter White,” a sweet and light fruity blend from Leelanau Cellars.

Uncle Jack made a wise decision all those years ago when he retired to Leelanau County.  A more desirable lifestyle would be hard to find.  Life in Leelanau is simple and friendly.  The surroundings are spectacular, and there is plenty to keep you busy.  History and beauty await you around every bend, and the county villages are charming and scenic.

You get the sense that nothing has really changed much in Leelanau County, and that’s a good thing.  Climb up to a high point, whether it’s the top of Sleeping Bear, or the Empire Bluffs, or Dumas Point, and you’re the King of all you survey.  Grab an ice cream with your kids, spit a few cherry pits for distance, and grill some fish under the stars.

Your cares are all somewhere else when you find yourself in lovely Leelanau.

Video and other photos – Apture