Over the Easter weekend, Pete and I were pleased to host visiting Michigan relatives.  The occasion was a milestone birthday for my cousin, Joan.  Her dad, my Uncle Jack, who is in his mid-eighties, wanted to come to Minneapolis, too.  (We wrote about Jack’s neck of the woods here, and introduced you to him and his siblings here.)

Long on Joan’s Bucket List has been a visit to the world-renowned Guthrie Theater in Minneapolis, and Pete and I were determined to make this happen for her special birthday.  Joan attributes her love of Shakespeare by way of introduction from my English teacher mother, on trips to Stratford, Ontario‘s annual festival in the 1960’s.  It should also be noted that Joan’s son, Adam, is an accomplished playwright himself – exciting! We gave Joan the Guthrie’s 2010 schedule and told her to take her pick.  I wasn’t surprised that she chose MacBeth. 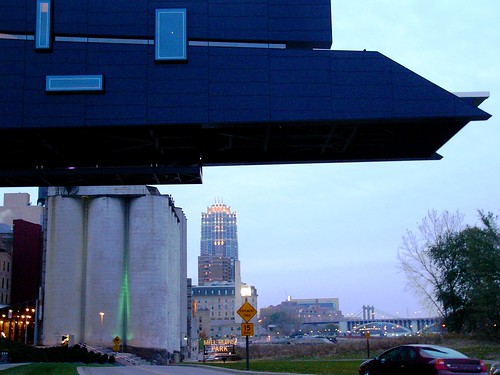 Four years ago, the Guthrie underwent a major transformation, relocating from its original home to a stunning new location overlooking the Mississippi River.  The effect is that of a long-time lover in ultra-contemporary haute couture.  The most striking feature on the building’s exterior is the “Endless Bridge,” a gravity-defying promontory that juts over West River Parkway.  The award-winning design assisted in transforming the Mill City neighborhood of Minneapolis into a premier residential district. 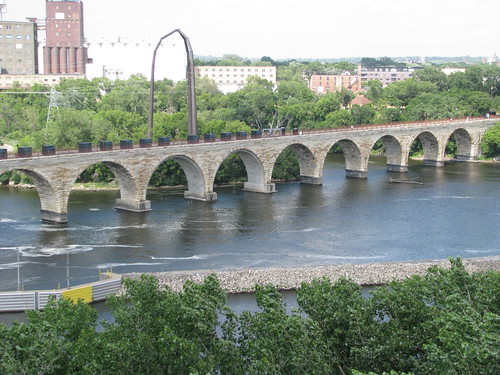 There are unparalleled views from the Endless Bridge of the Mississippi River’s west and east banks, as well as the falls which ensured municipal development around milling operations which began in the 19th century.  The vista elicited a wistful assessment from my cousin, the former mayor of East Lansing, and now a policy analyst for the troubled State of Michigan:  “This is a city that works, isn’t it?”

Since 1963, when Tyrone Guthrie announced his surprising choice of Midwest location for the culmination of his professional aspirations, Shakespeare has been the cornerstone of each production season.  Macbeth is the 50th Shakespearean play staged in the Guthrie’s legendary “thrust” format, which as Director Joe Dowling reminds, keeps “the intimacy between actor and audience our hallmark.”

Macbeth is a psychologically and philosophically sinister examination of base human nature.  Dowling chose to outfit his cast members in vintage garb reminiscent of the 1930’s.

The parallels in costuming with the evils of fascism made a disturbing and discordant, yet horribly familiar, visual statement.

The Macbeth program notes quote former President Bill Clinton, seemingly without irony: “Shakespeare had an indelible way of warning of the dangers of blind ambition, the fleeting nature of fame and the distinctive desire to equate personal advantage with public purpose and to justify any action, even murder, if it advances them.  Giving in to such temptations condemns one to a tragic life ‘signifying nothing.’ “

As audience members, we were taken relentlessly along with the Macbeths’ doomed descent and demise.  Dowling’s interpretation took full advantage of the stage’s asymmetrical dissonance, with actors entering and exiting amidst the audience seating itself, as well as via hidden trap doors and elevators, along with traditional side and backstage routes. The production was forceful, chaotic and raw.

Pete, Uncle Jack, Joan and I did not observe this play as much as we temporarily participated in the consequences of blind ambition.  Shakespeare’s timeless story was a powerful and sobering reminder of how power and desire are easily corrupted.

In the program notes, Friedrich Nietzsche is quoted:  “Whoever thinks that Shakespeare’s theater has a moral effect, and that the sigh of Macbeth irresistably repels one from the evil of ambition, is in error. . . He who is really possessed by raging ambition beholds this its image with joy. . . in defiance against life and advantage for the sake of a drive and idea.” – From “On the morality of the stage,” Daybreak: Thoughts on the Prejudices of Morality, 1881.

The Macbeths’ conscious choice of evil is further characterized in the program by referencing W.H. Auden in his 1947 Lectures on Shakespeare as wanting to act “as devils without becoming so, and that destroys them.” It seemed as though they were quite surprised that there would be such sinister consequences – their own horror at their deeds – arising from each’s individual conscience.  Taken as I was by the almost comedic entertainment of the three witches and the regal back story when I’ve read and viewed the play in the past, this pathology was chillingly and starkly revealed through the lens of my own more recent experiences.

On the way home, there was much to think about, but little to discuss.  The play’s lessons on equivocation in the face of real evil were stark and boldly stated.  It wasn’t a difficult stretch to equate them with current events and international characters, along with a foreboding reminder that evil has yet to be eradicated. Instead, as posed by another of Shakespeare’s characters, the malevolent Richard III, more and more it seems as though evil’s proponents clothe their “naked villainy with odd old ends stol’n out of holy writ. . .”

We attended Macbeth on Good Friday, and it was appropriately suited for Christendom’s darkest day.  Forever trapped in the limbo created by self-betrayal through evil deed, the Bard’s characters present a lesson that could be obliterated in a seductive instant.  Beware.