Heading to the Balkans? Don’t miss Sofia! Use our top 10 list of things to do in Sofia Bulgaria for first-timers and get acquainted with a fascinating city.

When we planned our time in the Balkans, locations other than Sofia, and Bulgaria in general, took center stage. But then we visited. In the space of a few days, we encountered a host of Sofia attractions which convey the city’s rich heritage spanning more than two thousand years. We took to Sofia immediately. The Bulgarian capital city’s vibe is plucky, progressive, stylish, and steeped in layers of history. We had to share our experiences in this Sofia blog post.

Please note: there are affiliate links in this post. Should you click through to search and/or make a purchase using our link, we will earn a small commission, which will have no effect on the price you pay.

Background: Sofia has been a settlement since at least 4 centuries before the time of Christ. Briefly occupied by Philip of Macedon and his son, Alexander the Great, in the 4th century B.C., the city then called Serdica was conquered by the Romans around 29 B.C. As an administrative center for the Roman Empire, Serdica was walled and civic buildings such as public baths, a basilica, and an amphitheater were built. When the Emperor Diocletian (see our write-up on his retirement palace in Split, Croatia) divided its province into two, Serdica became one of the new capitals. In 311, the year of Diocletian’s death, Emperor Galerius delivered the Edict of Toleration in Serdica, which effectively ended Christian persecution begun by his predecessor. This legalized Christianity throughout the Empire.

Emperor Constantine the Great referred to Serdica as “his Rome.” Byzantine Emperor Justinian rebuilt Serdica after it was destroyed by the Huns, and it was rebuilt after Slav incursions until 809, when it became part of the First Bulgarian Empire. In the next couple hundred years, control over the city went back and forth between Bulgarians, Magyars, and Byzantines.

In 1376, the city was renamed Sofia, became a center for goldsmithing and other craftsmanship, and was conquered by the Ottoman Empire six years later. Its diverse population grew to over 20,000 inhabitants during the Ottoman occupation, consisting of Bulgarians, Ashkenazi and Sephardic Jews, Turks and Roma. Liberated by the Russians in 1878, Sofia became the capital of the Principality, and later the Kingdom of Bulgaria in 1908. In 1925, Bulgarian Communist terrorists blew up the Sveta Nedelya Cathedral in the center city. During the 1930s and WWII, Bulgaria’s government allied itself with Nazi Germany. After the war, Sofia was the capital of the Communist People’s Republic of Bulgaria from 1946-1989.

Nowadays, Bulgaria is a youthful democracy with a rich heritage. Our list of top 10 list of things to do in Sofia Bulgaria for first-timers will help acquaint you with this vibrant and welcoming capital.

A Roman-era domed cylinder set on a square base, the St. George Rotunda in Sofia is believed to have been built on the site of a pagan temple. The Church of St George Sofia is famous for its five layers of frescoes which date back to the 4th century. These had been painted over by the Ottomans in the 16th century when the church was converted to a mosque, and only recently re-discovered and restored. This is the oldest building in Sofi a, dating back to when the city was home to Emperors Galerius and Constantine the Great. The structure is part of a larger ruins grouping from the 3rd and 4th century which includes a Roman street, a basilica and other buildings. Holy relics pertaining to St. Ivan Rilski, the patron saint of Bulgaria are kept here. When we visited, a joyful christening with several generations present was taking place. Holy Sunday Church in Sofia is located in the true center of the city, at the ancient Roman crossroads of Serdica. Originally a wooden structure built in the 10th century, Sveta Nedelya Cathedral was destroyed and/or demolished several times in its long history. Inaugurated as a large cathedral in the mid-19th century after a construction period of several years which was marred by an earthquake in 1858, its new domes were added in 1898. The Sveta Sofia church was completely demolished in 1925 after Bulgarian Communist Party terrorists detonated a bomb intended for Tsar Boris III there. The blast killed at least 150 people and injured another 500. This event resulted in a declaration of martial law and mass executions in retaliation. Relics of Serbian King Stephen Milutin, who ruled between 1282-1321 are housed in the church. Begun in 1954, this complex was built in what is known as the Socialist Classicist style. The buildings themselves are surrounded by the remains of a historical Roman fortress which stood at the crossroads of Serdica. They, in turn, surround the St. George Rotunda Sofia, which is the centerpiece of their internal courtyard. The original Bulgarian Communist Party House is now a National Assembly administrative center, flanked by an edifice that holds the TZUM department store and the Bulgarian Council of Ministers on one side, and another which houses the President’s Office, the Ministry of Education and the Hotel Balkan.

Many archeologists believe the Hotel Balkan is sited on the remains of a Roman palace which they attribute to Constantine the Great. The Hotel Balkan has hosted royals, heads of state and celebrities throughout its six decades of operation.

Adjacent to the Largo are large excavations revealing Thracian and Roman ruins of the city of Serdica, which eventually will be viewed under glass. Two pedestrian underpasses connect as entrances to metro stations serving Nezavisimost (Independence Square). Sveta Petka Cathedral rises adjacent to the Largo and the excavations in one of the underpasses. Sveta Petka Cathedral is an Orthodox church was built during the Ottoman occupation, half-buried so as not to exceed the height requirement of a soldier on horseback. Sveta Petka church boasts interior frescoes and composite stone and brick walls over a meter thick. Named for a Bulgarian martyr from the 11th century, Petka Ikoniyska, the church was also the patron of Medieval saddlers. Vitosha Boulevard is the main shopping street with some of the top restaurants in Sofi a and exclusive Western stores. The atmosphere is stylish and lively, with a variety of cuisines and a promenade atmosphere, particularly vibrant in the summer. Hidden in the city center near the St Alexander Nevsky Church, you enter this garden through a flower shop to find an open garden and a glass conservatory. Over 1500 species are represented, and you can purchase saplings and seeds. This garden dates from 1892, with an inaugural oak, which was planted with a gold coin placed by Tsar Ferdinand in its roots, still standing. Open January – July and September – December. Nursery services include professional advice on plant care and aesthetics.

8. National Art Gallery (in the former royal palace of Bulgaria)

After the monarchy was abolished in 1946, the former royal palace of Bulgaria was converted into the National Art Gallery. The collection consists of contemporary, National Revival and medieval paintings, as well as 4,000 religious icons.

Begun in 1884 and designed by three separate gardeners who developed the initial design, Boris’ Garden is named for Tsar Boris III.  Borisova Gradina Park is the oldest, largest park in Sofia. By 1886, the garden had four alleys in an area of 300,000 square meters. A large lake was added in 1889, along with deciduous and conifer trees. In the early 20th century, fountains, a playground, and a wealth of flowers and ornamentals made Borisova Gradina Park one of the largest parks in the Balkans. The garden was last reconstructed in 1986. 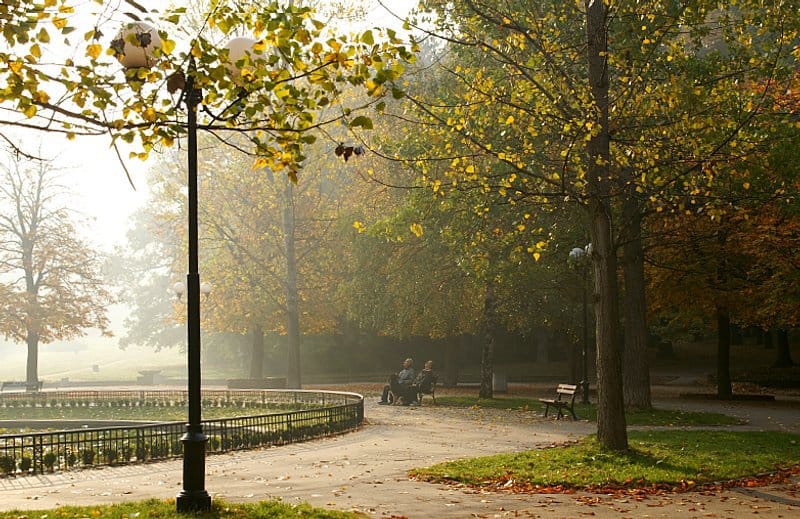 One of the largest Eastern Orthodox cathedrals in the world, the Neo-Byzantine Russian church in Sofia was built to memorialize the quarter million Russian, Ukrainian, Belorussian and Bulgarian soldiers who died in the Russo-Turkish War of 1877-1878. Named for a sainted Russian prince and displaying Saint Alexander relics (including what may be a rib), it is over 34,000 square feet in size and can accommodate a congregation of 10,000. All too quickly, our stay in Bulgaria came to an end. We would have liked to visit more Sofi a attractions, but sadly, ran out of time. We’re very much looking forward to returning to this beautiful, and very underrated, Balkan capital.

If you have experienced difficulties in traveling by air to Sofia, such as flight delays, cancellations, or denied boarding, you may be eligible for  compensation. Check your eligibility at SkyRefund.com.

Sofia is probably the only capital city in Europe where you can live like a king in 5+ star comfort for around $60 per night.

The Sofia Hotel Balkan, where we stayed, rivals and surpasses 5-star properties in other European capitals. One of the best hotels in Sofia Bulgaria. Amenities include restaurant, bar, salon, business center. We had the best pedicures we’ve ever had, never to be forgotten. The Hotel Balkan’s spacious, luxurious interiors are beautifully finished and the service is impeccable. There are a number of fun, interesting and inexpensive tours that cover many of the sites we listed above and more. And for a different historical approach, consider a Sofi a pub crawl of hidden bars.

We ate several meals in sidewalk restaurants on Vitosha Street during our stay, but the evening we went down a leafy side street for traditional Bulgarian cuisine at Moma Restaurant is one of the top restaurants in Sofia. Master chef Alexander Nikolov prepares eggplant-based and grilled meat dishes using vintage recipes, and then gives them a contemporary twist. The setting is a striking combination of Bulgarian textiles and 20th-century modern seating, with enlargements of beautiful Bulgarian women in traditional dress. The building dates to the 1930s and there are three floors for indoor seating as well as a garden deck.