For many travelers, stepping out of a train at the Bucharest Gara de Nord station may be the most exotic and intimidating arrival they’ve experienced in all of Europe.

The Bucharest Gara de Nord train station is the largest in Romania and usually the only one that travelers will use. There is definitely a marked difference in atmosphere from neighboring major hubs such as Prague, Vienna, or Budapest.

The somewhat somber façade of Bucharest Gara de Nord is a testament to its history. Constructed in 1872, this building was a stop en route to the Eastern Front during the First World War and was later bombed by the Allies in 1944.

About 200 trains now pass through the terminal on a daily basis. Typical outbound destinations include other parts of Romania as well as the international cities of Budapest, Vienna, and Sofia. Anyone who plans on departing from the station or changing trains here should consider purchasing their tickets in advance, because the popular routes may sell out quickly.

Sadly, Gara de Nord may not deliver the most positive impression for new or repeat travelers. In fact, there are a good many safety issues that you will want to consider if this station is part of your route. We were a bit nervous finally pulling into the outskirts of Bucharest after overnighting from Budapest. Warned by one of our co-passengers to mind our compartment’s belongings during previous stops, we’d also been advised in broken English by both of our jovial new friends, the porter and waiter on staff, to keep our wits about us as we exited the train.

Bucharest Gara de Nord can feel like a free-for-all with all sorts of characters roaming about, ranging from Roma (gypsies) to taxi huxters. We were immediately approached by a shady-appearing individual who was quite insistent upon “helping” us get to a currency exchange and “the best” taxi. Despite repeated assurances that we didn’t need his services, it was disconcerting to be openly followed around the station as we went about our business.

It is not uncommon for arrivals to be offered private money exchanges, despite the fact that this is illegal. We noticed all sorts of would-be wise guys self-staging at various intervals along the international arrivals platform.

An active petty criminal element also can be found here, including pickpockets, so those making their way through Gara de Nord should exercise the usual cautions. Some travelers also report being told their hostel is either temporarily closed or no longer in service.

It is best to ignore these various offers of assistance and information. Making matters worse is the fact that security at Gara de Nord is varied in its intensity and one never knows what to expect in the way of police presence. 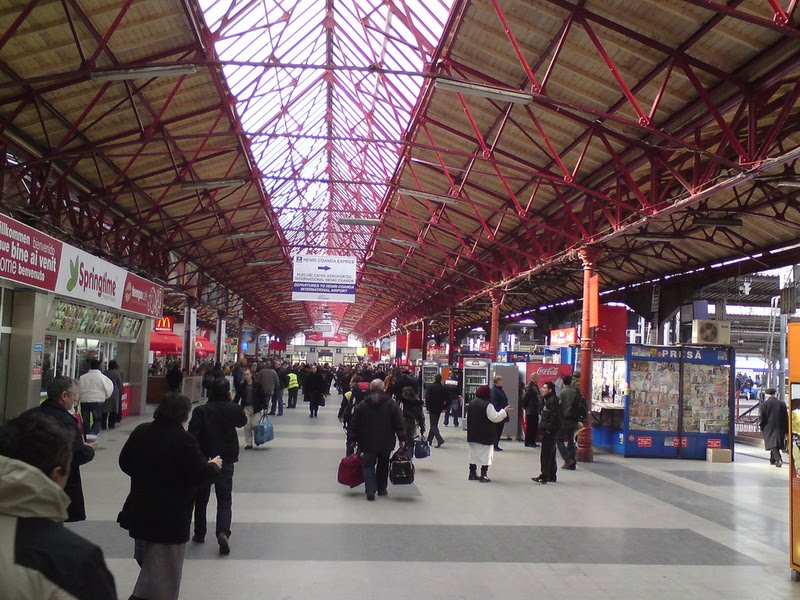 However, the train station does have its good points. It is open 24 hours a day, so there are no worries about being locked out, although I would question the wisdom of waiting for any length of time during the night.

The ATMs at this location are conveniently located. We observed a Roma woman leaving her child unattended during a transaction, and when the baby wandered, two kindly babushkas were there to save the day.

There are two currency exchange offices. Be aware that the one closest to the international arrivals area is the smaller of the two. When we arrived during the late morning, the smaller office was already low on Romanian cash, so unexpectedly closed.

Bucharest Gara de Nord also has complimentary Wi-Fi throughout (although it is insecure, so you’ll want a VPN or other security precautions if you need to log in; we waited until we got to our hotel).

Signs will seem easy to understand by comparison with Hungarian or Czech, as the Romanian language has Latin/Romantic roots. Hungry travelers can choose from onsite fast food eateries such as KFC, Subway, and McDonalds, but there are other vendors and a small supermarket here as well. Those who are leaving from Bucharest Gara de Nord for the city or the airport should take care to avoid the many illegal taxis that often charge double the price of the correct fares for various routes. Therefore, it is best to only use the services of those cabs found in the officially designated taxi stand area.

As with anywhere else, make sure the taxi drivers use the meter and have the correct tariff written on the doors. Avoid drivers who offer you an alleged bargain.  Travelers departing the station can also take the metro or the bus, both of which are cheaper alternatives to catching a cab.

If you’re on foot or changing trains, be aware that there is a sizable number of homeless young people in the vicinity who frequent the Bucharest Gara de Nord waiting rooms in cold weather. These are the “sewer children,” drug users who frequent an underground network of tunnels.

One of the main entrances to this underground city is, improbably, a hole in a traffic island just outside the station. While many of these kids are HIV positive, the greater concern is that about 25% of them are tubercular, as well. Unfortunately, not much has changed for this segment of the population since Ceaucescu was removed. The 780 Express bus line connects directly to Henri Coanda International Airport with stops in front of both the Arrivals and Departures Terminals.

Tips and Observations: Bucharest isn’t all doom and gloom, but it definitely is a mixed bag if you’re used to Western or other Central European hubs. Our taxi driver repeatedly crossed himself every time we passed an orthodox church on the 15 minute ride to our hotel. When we asked whether he was religious, he answered, “No, it was just in case.”

We stayed at the Radisson Blu Bucharest, a modern business hotel located close to the city center in a mixed neighborhood – shabby yet still dignified Belle Epoch grand residences interspersed among Soviet-style small apartment blocks – undergoing extensive renovation. We had a lovely meal at La Mama, within walking distance, which was just authentic enough to satisfy our tired, hungry palates.

There was quite a bit of February snow hampering pedestrians and vehicle traffic alike. On our way back to the hotel, we observed an empty purse in a snowbank and were unexpectedly castigated by a private citizen with a snow shovel; we hadn’t tipped him for clearing our path. Commercial snow removal appeared to be non-existent.

Still, we found Bucharest had its own charm. Service at our hotel and restaurant was warm and hospitable. The city atmosphere was equal parts optimistic and determined. We’d love to return and spend more time in Romania.