In love with Budapest 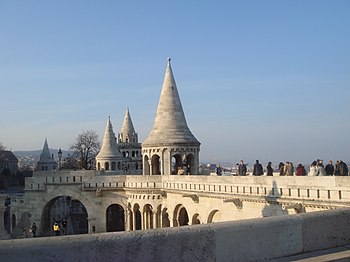 Thanks to Architect Frigyes Schulek, we fell in love with Budapest on the morning we visited Fisherman’s Bastion and Matthias Church.

Halaszbastya, the Fisherman’s Bastion, was designed in Neo-Romanesque style for Hungary’s Millennium. It was built between 1895 and 1902 as a gateway to Castle Hill and Matthias Church in Budapest. The Millennium, which celebrated the 1000th anniversary of the Hungarian state, occurred in the middle of the Golden Age of Budapest (1873-1914). During this time, the Pest side of the city’s appearance was greatly changed with the additions of St Stephens Basilica and the Budapest Parliament along the Danube. Panoramic views from Fisherman’s Bastion take in the city and river vistas, and its vantage sites frame the individual buildings. The Castle Hill district in Budapest, including bridges across the Danube and the hill’s embankment from which Halaszbastya rises, is a World Heritage Site because of its strategic historical importance to Hungary. Interestingly, Fisherman’s Bastion was restored after WWII’s near complete destruction by Frigyes Schulek’s son, Janos.

Neo-Romanesque style had been popular during the time of Stephen I, the first Hungarian king who ruled during the 9th century. Schulek, a graduate of Buda’s Jozsef Technical University, had become a member of the “Wiener Bauhutte” while studying in Vienna at the Academy of Fine Arts. This Bauhutte (literally a “building workshop”) was an association which predated the more famous Wiener Werkstatte modernist collective.

The Bauhutte esthetic championed masonry and other trades, whose practitioners had organized into a democratic working structure during medieval times. This brotherhood of craftsmen consisted of individuals and guilds who worked on Gothic cathedrals. In Vienna, Schulek’s interest in the architecture of the Middle Ages began a vocation. Schulek subsequently worked on the Regensburg Cathedral restoration in Germany. Upon his return to Hungary, he had helped design Pest’s City Hall, taught technical drawing at the Budapest Art School, and was appointed architect for the new National Monuments Commission, which reconstructed and restored medieval castles and churches.

The Halaszbastya project complemented the restoration and Neo-Gothic redesign of Matthias Church that Schulek had begun in 1873. This year is significant, as it marks when the three separate communities of Buda, Pest and Obuda (Old Buda) were unified once more into one capital city, Budapest. The Fisherman’s Bastion was never intended to be a fortress. By this time in the late 19th century, the castle had ceased to be of special military significance. Instead, the intent of the design was to “embrace the church.” As well, it was designed for traffic flow: Great numbers of people would be accessing Buda Castle hill from the Danube during the Millennium celebrations.

Built on the remnants of thick walls dating back to the 17th century, Halaszbastya sits on a portion of the Palace Hill that is said to have been protected during medieval wars by the Halasz (guild of fishermen). These fishermen lived in an area called Watertown between the fortification and river below. In peacetime, they sold their daily catch at a marketplace on the castle’s hill. Schulek romanced his Halaszbastya design into an evocative, fairy-tale place for visitors to take in the magnificent views. Each of the seven towers features a Hungarian chieftain from the tribal coalition that became Hungary in 895. The towers are connected with a series of promenades and terraces from which to enjoy the city’s breathtaking panorama.

The plaza between Halaszbastya and Matthias Church (also known as Church of Our Lady) is dominated by a bronze statue of King Stephen I of Hungary (Saint Stephen) astride a horse. The statue’s Neo-Romanesque pedestal was designed by Schulek with depictions from the King’s life. Although historians believe the Church of Mary was built here by Saint Stephen as early as 1015, the earliest architectural remains point to a Gothic building dating after the Mongol invasion of Buda in 1241-42. This church was enlarged in the 13th – 15th centuries. The only real Gothic portion of the church that remains today is the 14th century Mary Gate, at the foot of the bell tower.

Matthias Church is named for King Matthias Corvinus (1458-1490). King Matthias was greatly interested in the arts and sciences. His royal court was filled with artists he invited from abroad to establish Renaissance ideals in Hungary. The crest animal of King Matthias – a raven holding a gold ring – can be seen on one of the church’s towers. There was incomplete historical evidence to single out an architectural period from which Schulek could begin restoration work on the church. His methodical surveys had exposed architectural elements which told the church’s story: French Gothic origins, destruction by fire, use as a mosque during the Ottoman period, post-siege reconversion in 1586, Franciscan and Jesuit influences. So, instead, Schulek basically built a new church by his own design in the neo-Gothic style.

Today, Fisherman’s Bastion and Matthias Church are two of Budapest’s most-visited attractions, not only for the breathtaking views, but their architectural interest. Don’t miss!

Tip: Parking is limited in the immediate vicinity of the two attractions. If you intend to rent a car in Budapest, you will want to research the cost and availability of parking with your accommodations or along your itinerary.