“Christopher Columbus had a pocketful of beans.” This engaging imagery bridged our two Context Travel Barcelona tours: Gothic Quarter and City of Chocolate.

Arriving in a city we’d never visited, we welcomed the opportunity to acclimate ourselves by taking two Context Travel Barcelona tours: City of Chocolate and Gothic Quarter. Little did we realize a single engaging story would bridge and overlap these two seemingly unrelated approaches to educating and entertaining us with Barcelona’s fascinating history and tasty legacy. Christopher Columbus, whose ancestry is claimed by Catalunya in an ongoing dispute with Italy, Portugal and other parts of Spain, had returned to Barcelona rather triumphantly from the New World. Commissioned by the Crown of Aragon (in the personages of Ferdinand and Isabella) to explore new routes to India and lay claim to any discoveries in its name, he was back with a number of treasures – live turkeys, pineapples, tobacco, woven hammocks, and almost as an afterthought, a handful of cacao beans. Without old Chris, there wouldn’t be this!

The story goes that Columbus awaited his audience with the Sovereigns in the courtyard where we were standing in Barcelona’s Gothic Quarter. While our Context Travel Barcelona guide pointed out architectural clues as to what had occurred over the centuries as the buildings were repurposed, I daydreamed. Columbus hadn’t been particularly lucky during his explorations: one of his ships had sunk, he’d failed in his original mission, there were huge navigational mistakes during the voyage, and he’d narrowly escaped mutiny. He must have been pretty nervous, I thought, in the moments before they called him in. Perhaps he was wondering whether he could live up to the self-congratulatory hype in the letter announcing his arrival which had precipitated this meeting? Gothic elements in every facet of construction

Later the same day, on our second tour with Context Travel Barcelona – the City of Chocolate tour – we heard more. Columbus hadn’t a clue what his pocketful of beans was for. While he observed that they were used to make a drink popular in the New World, its bitter taste was unappealing in the Old. Not until about a hundred years later would drinking sweetened chocolate become palatable with courtiers and nobles. And a hundred more would pass before mere mortals, like us, would be granted access to the deliciousness.

Context Travel Barcelona provided us with passionate docents, Sonia and Esther, who were enthusiastic experts in architecture and chocolate, respectively. As we walked pre-arranged routes, Sonia and Esther deftly acquainted us with the subject matter by using a variety of senses.

With our eyes, we observed Roman, medieval and modern architectural elements juxtaposed together. Roman temple columns remain along with newer construction around them

We learned to spot the faux Gothic. These were 19th-century attempts at “Disney-fication” in the Quarter, which sought to prettify things ahead of Barcelona’s Universal Exposition in 1888. How faux can you go? A 19th-century bridge between two original Gothic buildings. Your clue? It’s too perfect.

With our ears, we heard the stories of incredible feats of Medieval engineering. We were told about the Guilds of tradesmen and artisans, of Christians and Jews keeping their own communities, of politicians and merchants who built the city’s fabled wealth. To our noses came fragrant aromas in the narrow streets of the Quarter and the boulevards of the newer Eixample part of the city. Narrow streets in the Gothic Quarter

With our fingertips, we traced the textures of history. The Roman wall, with younger fill-ins

And oh, did we ever taste. Cups of rich, hot chocolate devoured with whipped cream by the spoonful. Thick chocolate in a cup with whipped cream by the spoonful By the end of our day with Context Travel Barcelona, we were satiated. We had been given an in-depth look at the city’s layers of heritage from ancient times until today. This valuable perspective would affect the rest of our impressions of Barcelona during our stay. We had tasted almost too much chocolate, never dreaming this could even be a possibility, loving it as we do! And we will always remember the story of Christopher Columbus, nervously waiting to be called into the Court of Aragon, with a pocket full of New World beans. 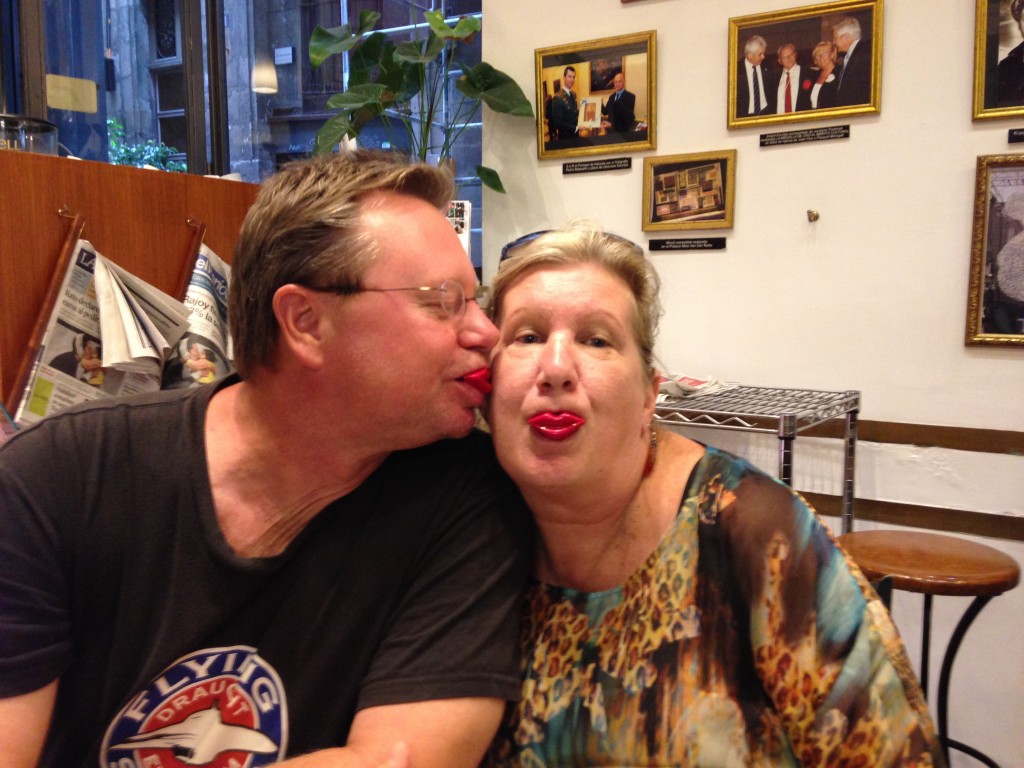 Puckering up with the signature chocolate lips from Escribà Context Travel’s vision is to “bring together local specialists with curious travelers to educate and impassion them; to allow them access to places and cultures that might otherwise remain out of sight to the casual visitor; to invite them off the tourist track and into the real life of the people, history and culture that makes these capitals, destinations.” Context provides specialty tours in more than 30 cities and four continents. Context Travel Barcelona offers private guides and small group walking tours for those who are seeking in-depth experiences in history, gastronomy, art, architecture and other cultural aspects. No more than 6 guests per tour. Prices begin at just over 80€ per person for small groups, just over 345€ for private guides. Tours last around 3 hours, and some include more walking than you may be used to; wear comfortable shoes!

We’ve taken Context Tours all over the world. They are wonderful and highly recommended. Learn More.

Note: We were guests of Context Travel Barcelona in conjunction with TBEX for these two tours. All opinions are our own.