In the mountains above Sarajevo lies Lukomir, Bosnia’s most remote village. Its semi-nomadic herders keep the old ways in the shadow of medieval tombstones.

If you watched the 1984 Sarajevo Olympics, you know Bjelasnica, the site of alpine skiing events. What you may not know, and we didn’t either, is that up a single lane dirt track from where these events were held, less than 20 km as the crow flies, lies Bosnia’s most remote village. In Lukomir, life remains as it must have been hundreds of years ago.

Bjelasnica, at over 6,000 feet, is Bosnia’s highest mountain, in the Dinaric Alpine range. At 1500 meters (just shy of 5000 feet) here, the tree line ends. Along the Rakitnica River canyon, which is over 800 meters deep, a ridgeline trail popular with hikers leads to Lukomir. So does a back road from the Olympics venue on Bjelasnica’s slope. This is the route our small tour takes. To give a sense of scale

Our vehicle bounces, rattles, and sways, alternately hesitating and tumbling into deep ruts and rocky holes. I take note of the shallow topsoil, the tree roots spreading in wide, contorted tentacles to anchor them upright by interlocking with their neighbors. Emerging from the dense, Grimm-like forest into the light, the undulating karst above the treeline is delineated geometrically with stacked stone lines. “How were these made?” “By humans, long ago,” comes the answer. On the Bjelasnica mountain, overlooking the Rakitnica gorge, lies Lukomir, the most remote village in Bosnia

The scale of the landscape is hard to discern, but presently we happen upon solitary herders, young men alone or in pairs, with their flocks of long-tailed sheep. Their size gives us the perspective we need to take in the grandeur. Enormous dogs of unknown pedigree accompany them. One rushes our vehicle in ferocious protection mode; he’s huge. “He has to be,” we’re told. “There are wolves.” It seems like the longest of walks for these young shepherds back home for the night. It takes us 20 minutes more to reach the village. At the village limits Village fields and only road

Bjelasnica has drawn semi-nomadic tribes since at least the tenth century to its slopes and valleys. Less than 50 km to the northwest of Lukomir, the Battle of the Bosnian Highlands was fought in 927, with Croats defeating Bulgarian invaders. Bosniaks can trace their lineage to the Early Slavs, who arrived here during the Migration Period in the sixth and seventh centuries. They intermingled with the Illyrians, Celts and Germanic Ostrogoths who had arrived four hundred years earlier. The history is murky thereafter, in part because the region is so remote. Some scholars suggest this place was one of refuge rather than colonization. This suggestion bears out. Lukomir (meaning “beautiful view”), deemed of no strategic value, is the only such Bosnian village undestroyed by the Serbs in the 1990s war.


Around the same period Croats were battling the Bulgarians in the tenth century, a Christian religious sect was forming in the Balkans. The Bogomils opposed feudalism under Tsar Peter I of Bulgaria. They were considered heretics by both the Catholic and Orthodox Churches for promoting a more dualistic doctrine which didn’t leave much room for the official hierarchies in those faiths. While some scholars believe the Bogomils first began the tradition of carved stone stecci tombstones, others indicate they are a Bosnian cultural, not religious sect, phenomenon. Lukomir’s stecci are adjacent to the graveyard overlooking the village. Whatever the faith of the individuals who carved them, the stecci are silent confirmation: Lukomir’s current villagers are descended from nomadic tribes who originally came to Bjelasnica in summer from the Podvelizje plateau above Mostar in Herzegovina to access sufficient water for their herds. In those days, it would be your life’s work to carve your individual stecak. It represented your profession or something important about you for which you wished to be remembered. Much of Bosnia converted to Islam following the conquest of the Ottoman Empire in the mid-15th century. Scholars believe Bosnians were open to conversion because they weren’t fond of either the Orthodox or the Catholic churches from these earlier times. Lukomir is almost entirely Muslim; the village has one mosque to which we observe the faithful walk for prayer. The village communal water source. The two homes we visited also had running water, installed at the same time as electricity, in 2002.

The Historical Architecture Society of the United Kingdom has proclaimed Lukomir to be one of the longest continually inhabited villages in Europe. Most of the buildings are more than two hundred years old, built of stone with original cherrywood shingles, now patched with corrugated metal in places. Built to withstand heavy snows, their entrances are low and the roofs pitched steep. Traditional cherrywood shingles on an outbuilding

In such communities everything was interconnected, closely dovetailed, and all elements mutually supported and controlled one another. Each individual kept an eye on the community, and the community kept an eye on him. One household observed another, one street watched over the other, because everyone was responsible for everyone else, and all of them for everything; each man’s destiny was bound up not only with the members of his own household and his relatives but also with his neighbors, coreligionists, and fellow citizens. In this lay the strength and also the slavery of these people. The life of a single cell was possible only in such a tissue, and the existence of the whole system only under such covenants. – Ivo Andric, Bosnian Chronicle

“It’s a hard life,” says our guide, “and the younger people don’t want to live it.” The villagers are already thinning toward the end of the season. There is one more hay cut, and a festival before summer is over. Then comes the Eid al-Adha holiday, the children to attend school and the elders to live with relatives in Sarajevo. It’s easy to see how oppressive winter might be in such isolation. We met Nura and Nura who offered knitted socks and mittens for sale. The elder Nura (in traditional headdress) is 90 years old, and has buried seven children. I was assured she had a place to go for the winter with other relatives. We regroup for a traditional meal of burek – spinach or meat rolled in pastry and then arranged like a pie for skillet cooking – and yoghurt. This turns out to be our favorite meal in Bosnia. All the while, life goes on around us in the village. Burek with yoghurt to drink. We recently came across this authentic Bosnian recipe for Burek.

Lukomir is a study in contrasts: the grandeur of its setting, and the humbleness of its buildings. Houses with the traditional conical haystack

The strength and longevity of its people, and the fragility of their lifestyle. 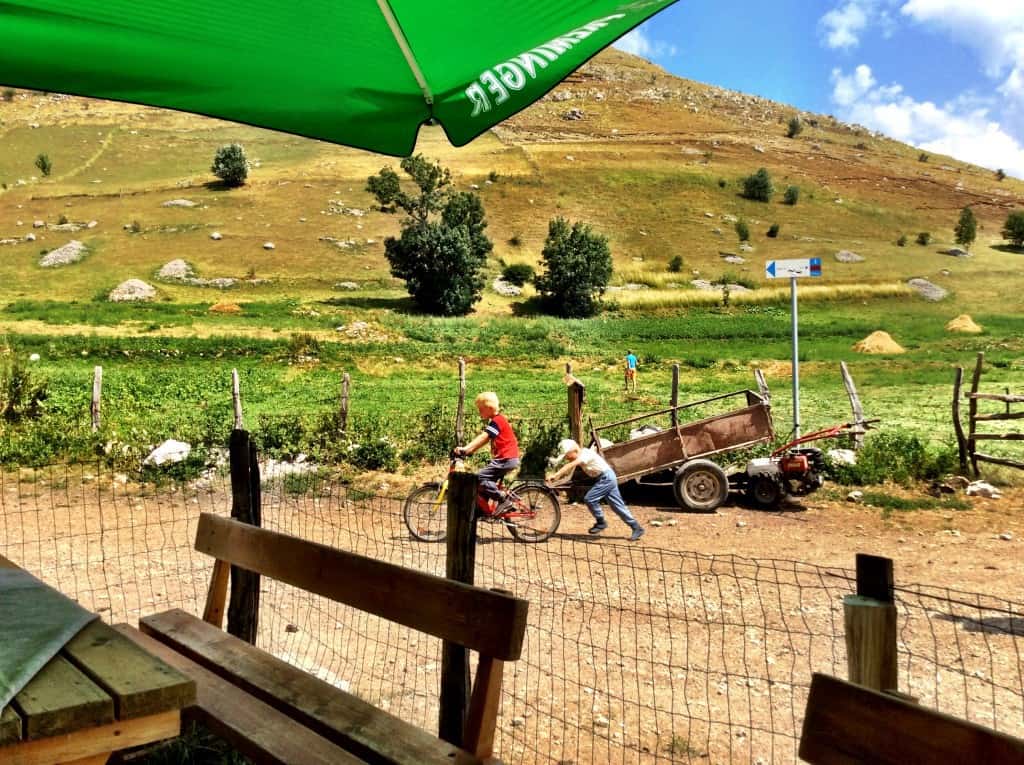 Boys at play in the village center

We know there are no guarantees for things in Lukomir to stay just as we see them this day. Why should villagers resign themselves to a life of difficulty just because we outsiders might wish to visit and observe? If this were America, it would have been Disney-fied long, long ago.

I find myself annoyed at the brash ATV-riding young people, who flippantly toss a coin to one of the ladies for a photo and zoom away loudly, piercing the quiet. But yet, didn’t we just do virtually the same thing, even though we asked more nicely? Like so many examples we come to find in the Balkans, this visit can’t be categorized. It’s fair to say our experience here, though, would be markedly different even next year.

And so the melancholy energy of this place, the loneliness of the stecci, the moody dapples of the sun racing across the vales, the brightness in Begara’s eyes this day will always be Lukomir to us. Perhaps most of it will remain. We visited Lukomir on a group day tour. While it was billed as “easy” walking, we opted out of an additional hour’s hike over slippery surfaces to a nearby waterfall. Instead, we soaked in the atmosphere of the village and were invited in for coffee at Begara’s house. Full Day Lukomir Village Private Tour includes pickup service from your hotel and transport from Sarajevo to location and back, a stop at the Olympic ski venue, coffee or tea, picnic lunch and snacks, one English speaking, fully-equipped and experienced guide.