Munich’s Schwabing neighborhood legacy lives on as an early 20th-century lightning rod for artistic, intellectual and even radical activity.

This wasn’t my first visit to Munich, but it was Pete’s. Since he’s not one for tightly-scripted traditional sightseeing in museums or tourist attractions, I thought we should explore a neighborhood outside of the old city center. Several resources pointed to Schwabing as the perfect example: lots of interesting art nouveau architecture, trendy shops, and a great bar/cafe/restaurant scene.

Earlier in the week, we’d wandered through a marvelous blank slate of a day in Paris soaking in the magic (see here: Paris in Perfect Patina). We wanted a similar experience in Munich. Where the Altstadt was a medieval or Baroque fairy tale, Schwabing might give us a taste of today’s “real Munich,” whatever that might be. So, we were set.

Arriving via UBahn at Schwabing’s Müchner Freiheit square off Leopoldstrasse, we soon realized that its gentrified, cosmopolitan atmosphere complemented an impressive history. In the decades before World War I, Munich was the cultural center of German-speaking Europe. Schwabing, founded in the 8th century, predates Munich by 500 years. Annexed in the 1890’s, it became a lively, bohemian neighborhood which attracted artists, writers, intellectuals, and political ideologues.

Schwabing is probably best known for its big tourist attractions: the enormous Englischer Garden and the Schwabinger Weinachtsmarkt, considered the finest artists’ Christmas market in the city. But its storied culture has been fueled by proximity to the two major universities in Munich. Toward the end of the 19th century, multiple influences converged to make Schwabing a lightning rod for the intelligentsia at the beginning of the 20th.

It could be argued that the 20th century began in Schwabing. In the years just preceding the World War I, Kandinsky painted Western art’s first abstract painting there, Hitler was hanging out in coffeehouses on the Schellingstrasse, and Lenin, midway through his long exile, was writing his most influential political pamphlets in an apartment off the Leopoldstrasse. – J. S. Marcus, The Bohemian Side of Munich Kandinsky’s 1908 painting: Munich-Schwabing with the Church of St. Ursula

Schwabing came into its own during the reign of Prince Regent Luitpold, who by all accounts was a congenial and benevolent ruler. Luitpold had a keen interest in promoting arts and education in Bavaria, and Munich became a cultural focal point during what are now referred to as the Prinzregentenjahre (literally, the Prince Regent Years) from 1886-1912. This liberal governance enabled the borough of Schwabing, known as Munich’s artist’s quarter, to flourish and attract intellectual talent from other parts of Germany and Europe.

“Schwabing is not a neighborhood, but a state of being.” – Fanny zu Reventlow

In the years between 1890 and 1914, Schwabing was home to such diverse personages as Nobel Prize for Literature winner Thomas Mann, Mann’s brother satirist Heinrich, poet Rainer Maria Rilke, painter Wassily Kandinsky, future revolutionaries Vladimir Lenin and Erich Mühsam, feminist Fanny zu Reventlow, Freud protege and anarchist Otto Gross, and mystic Alfred Schuler. Many of these individuals would later flee or be persecuted by the Nazis.

“I live my life in widening circles that reach out across the world.” – Rainer Maria Rilke

As Schwabing grew, its appearance reflected innovations in thinking, too. Architectural and decorative elements from the Art Nouveau style – “art should be the foundation of life” – were reinterpreted in a localized way. The result, Jugendstil, is more distinctly geometric and Germanic, a bit more orderly and repetitive with Teutonic references. Examples of Jugendstil can be found today throughout Schwabing: tile details, stucco coatings, curving elements and rooflines, classical geometrics. These elegant buildings are striking visual representations of the transition between the 19th and 20th centuries. The romance of Jugendstil architecture off Münchner Freiheit in Schwabing

Though the majority of Schwabing’s early 20th-century intellectuals had been born into the upper classes of society themselves, a widespread rejection of bourgeois thought took hold. Thomas and Heinrich Mann satirized their Hanseatic family roots and the rigid societal expectations they experienced in their hometown of Lübeck. Thomas even modeled the protagonist in his seminal work, Buddenbrooks, after his namesake father, illustrating the widening disconnect between the worlds of wealth and business with the arts.

Early feminist Fanny zu Reventlow, at odds with her aristocratic family, chose an unconventional life as a divorcee and single mother, promoting sexual independence and the abolition of marriage. Through a friend, she became involved with the Munich Cosmic Circle, a group of neo-pagans including mystic visionary Alfred Schuler. Along with all the enlightenment and intellectual freedom in Schwabing came elements of darkness. The Munich Cosmic Circle turned from anti-bourgeois thinking to the occult, in an attempt to stem world deterioration into a more “cosmic view” and rebirth derived from pagan origins. One of the symbols they adopted was the swastika. A rift developed in the group in 1908, attributed in part to Schuler’s anti-Semitism. This led some, such as industrialist Robert Boehringer, to believe that the Cosmic Circle and/or Schuler may have influenced Adolf Hitler in one of the many Schwabing salons during the period. Schuler’s gnostic reputation and later outspoken critical rejection of National Socialism might belie this conjecture. 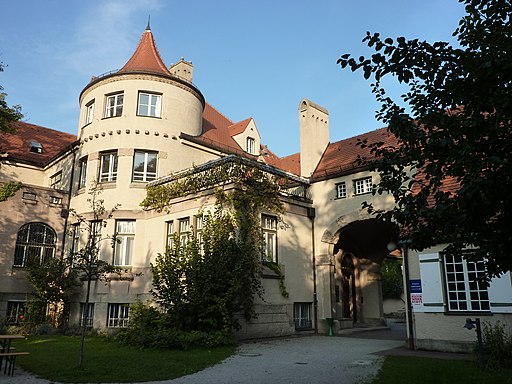 Another son of Lübeck, Erich Mühsam, may have plotted a post-World War I uprising in Munich at a table in Schwabing’s Cafe Stephanie. This led to a six day long soviet style government in Bavaria after the assassination of socialist Kurt Eisner, who had overthrown the Bavarian monarchy a scarce four months earlier. Mühsam’s coalition was overwhelmed by the Weimar Freikorps. After a stint in prison, Mühsam emerged to satirize and ridicule the racially-based tenets of Nazism, leading to another arrest after the Reichstag fire. He was tortured and murdered by Nazi guards in the Oranienburg concentration camp.

Lenin arrived in Munich in 1900, after completing a term of political exile in Siberia. Along with his wife, Nadya Krupskaya, he published an underground newspaper for distribution in Russia and political pamphlets from rented flats on Schleissheimerstrasse (the same street where Hitler lived a decade later), Kaiserstrasse and Siegfriedstrasse. Promoting the concept that a vanguard party of “professional revolutionaries” from the intelligentsia was necessary to effect political change, Lenin penned “What Is To Be Done” in 1902. This document is considered the cornerstone of Bolshevism. It didn’t take long for Lenin and Krupskaya to become persons of interest with the Bavarian police, leading them to relocate in London. Many historians believe they returned to Munich under pseudonyms to carry on their publishing and party organizational work prior to returning to Russia for the revolution.

The Münchner Freiheit, a lovely recessed square at Leopoldstrasse in the heart of Schwabing just west of the Englischer Garden, is where we chose to center our day. Formerly known as Feilitzsch Platz, it is the site of one of Munich’s largest Christmas markets. On the January day we visited, all was rather quiet until a voice with a bullhorn blasted through the quiet. Curious, we walked toward the tables where a small group was distributing literature. “No Nazis in Schwabing” read their hand-lettered sign. We were so surprised – and heartened – by this we didn’t think to get a photo. It was a graphic reminder that we must continue to take a stand against evil. Later we learned that Münchner Freiheit has a historical basis for Nazi resistance. In 1945, the Freiheitsaktion Bayern (literally Freedom Action Bavaria) broadcast anti-Nazi propaganda from two radio towers in Munich. The square was renamed to honor them.

Strolling side streets, we noted a variety of bars and restaurants from which to choose. Friendly residents were out enjoying the wintry sun, pushing prams, walking dogs, greeting their neighbors – and us – with cheerful smiles. Companions out for a stroll in Schwabing We ambled away the waning hours of the afternoon along Leopoldstrasse. At sunset, we ducked into a building dating from 1865, home to a sausage and pretzel tavern. The pub atmosphere was warm and cozy, the food and drink filling. It felt good to take the chill off, chat with adjacent diners, and return to the 21st century. Schwabing’s Münchner Freiheit is three UBahn stops up from Marienplatz (Munich City Center) on the Blue (U6 Garching-Forschungszentrum) line. If coming from the main Hauptbahnhof train station, take the Aqua (U4 Arabella Park line), change to Blue at Odeonsplatz. Tram lines 27 and 28 run north-south through Schwabing.

There are a variety of chic bars and trendy restaurants along Leopoldstrasse, which is the main thoroughfare dividing the borough into east and west districts. A Schwabing Eat the World Tour introduces the neighborhood’s unique history, art and Bavarian cuisine. MunichFound offers a self-guided walking architectural tour of Schwabing’s turn of the century Art Nouveau buildings.

Wirtshaus zur Brez’n is located at Leopoldstrasse 72, 80802 Munich, open from 10am – 1am Sun-Wed, 10am – 3am Thurs-Sat. Telephone: 089/39 00 92 Oversized fresh baked pretzels are served stacked on a spindle, hearty tavern fare with pork roast and other Bavarian specialties.