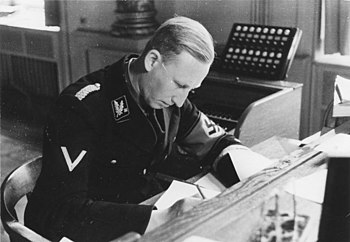 SS-Brigadeführer Heydrich, head of the Bavarian police and SD, in Munich, 1934 (Photo credit: Wikipedia)Visiting the locations in Prague where the heroes responsible for the assassination of Heydrich made their stand, we were thankful for their bravery.

Visiting the locations in Prague where the heroes responsible for the assassination of Heydrich made their stand, we were thankful for their bravery.

The world has the Czech and Slovak people to thank for eliminating Reinhard Heydrich. On June 4, 1942, twelve years to the day before my birth, Reinhard Heydrich succumbed to complications of injuries from the assassination attempt which had occurred in the previous few days. The assassination of Heydrich in Prague was perhaps overshadowed in the West by other events, but of significant importance as a turning point in WWII. 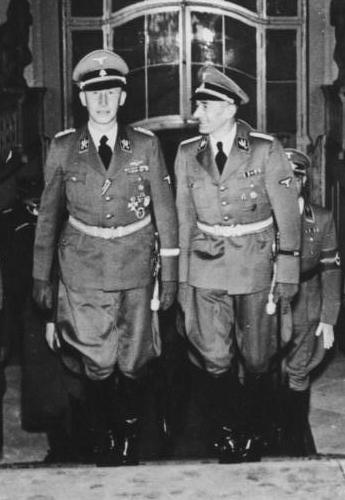 Known as “Himmler’s brain,” Reinhard Heydrich is perhaps best remembered as the chairman of the infamous Wannsee conference during which the Final Solution was wrought. However, long before that infamous meeting, Heydrich had made a name for himself as a high-ranking official in the SS, responsible for the formation and the ascent of its Gestapo, organizing Kristallnacht, and as President of Interpol. Ironically, it is believed that his ancestry was Jewish, although he took great pains to suppress any information associated with these rumors.

Named Deputy Reich Protector in 1941 of what was called the Protectorate of Bohemia and Moravia, consisting of Czech and Sudeten territory annexed by Hitler for strategic war machine purposes, Heydrich quickly imposed draconian measures designed to “Germanize the Czech vermin.” Terrorizing the population to convert “Czech garbage into Germans” was comprised of “methods based on racist thought.” In his first five months on the job, more than 5,000 people were arrested. In the weeks after February, 1942, resistance was suppressed with further brutality. Heydrich’s enthusiasm for torture, public executions and reprisals caused him to be referred to as “The Butcher of Prague.” Heydrich appropriated this college building as headquarters, symbolic of the Nazi thought takeover The Czech resistance used this residential building for clandestine radio operations. The Nazis reviled its “modern” architecture, and used the latest technology to ferret out forbidden radios from the street. Commemorative street plaques of Prague’s Jewish Holocaust victims at their former residence – here lived a father, mother and 11 year old daughter who were deported by Heydrich

Meanwhile, in London, the exiled Czech government coordinated a plan for the assassination of Heydrich with British assistance. Paratroopers trained by British commandos were dropped into the Czech countryside near Prague on December 28, 1941, and perfected their plan while in hiding. On May 27, 1942, on a suburban street that took a hairpin bend, the two assassins, best friends Josef Gabzik and Jan Kubis, made their move. As Heydrich’s Mercedes slowed to negotiate the turn, Gabzik raised an automatic weapon, which jammed. Heydrich inexplicably ordered his driver to stop, and raised his own weapon. At this moment, Kubis threw a bomb he had concealed in a briefcase at the car, wounding Heydrich, whose driver gave chase on foot. Gabzik returned fire, wounding the driver, as both assassins escaped.

Heydrich’s wound proved fatal. Horsehair and other material from the Mercedes seat had penetrated it, and he developed sepsis in the hospital, succumbing on June 4. In the aftermath, the SS conducted what they called a “ratissage” (literally, a rat hunt), in which over 10,000 were arrested. More than 1300 were promptly executed. Hitler personally ordered the eradication of the village of Lidice, after its entire male population was executed, with females and children taken to Theresienstadt concentration camp.

The assassins and their fellow paratroopers were hidden in the basement crypt of the Karel Borromaeus Greek Orthodox Church, in Old Town Prague. Their betrayer was a member of the Czech resistance who wanted the Nazi-offered financial reward. After torturing the young son of a woman who had operated one of the safe houses, including showing him his mother’s severed head, the Nazis obtained their location. The resulting stand-off at the Church ended when the Czech heroes were unable to tunnel their way out under the street and committed suicide. Entrance to the Museum in the Church crypt Steps from the crypt up to the church The hiding place of heroes

Heydrich had been on his way to Paris to become the Head of the SS in France on the day he was shot. Had he successfully assumed this appointment, the outcome of the war might have been totally different. As it was, Admiral Canaris (Heydrich’s rival head of the Abwehr), believing the Allies would invade France at Calais, bungled the intelligence sufficiently so that the German defensive structure on the shores of Normandy allowed the successful D-Day invasion. Pete with our guide, Martin

Tips: We took the WWII in Prague tour. There is quite a bit of walking with this tour, as you start at the Powder Tower (Prasna brana) through Old Town, proceed to the Jewish ghetto – which Hitler wanted to preserve to glorify his eradication of Jews, the Jewish cemetery, as well as monuments to the Resistance and other memorials related to the post-war and Cold War Soviet occupation. We found the description of the final battleground in Old Town Square, in which the people rose up after Hitler’s suicide, most poignant. This tour lasts for two hours, and is available daily at 10am and 2pm. Reservations recommended. Note that you will have additional time at the Church museum when the tour concludes. We felt a bit rushed at times, but there is a lot to cover. If you have more than a few days, you’ll probably want to revisit the individual sites in more depth. Our guide, Martin, was a personable fellow with excellent English, but his heavy accent and quick delivery made him difficult to follow at times. His book of photos from the Occupation allowed us a fascinating “then and now” aspect (see examples here). Ticket prices are 600CZK (about $30USD) for adults, 500 CZK for students (about $25USD).

Other fun things to do in Prague.