In the center of Istria lies Motovun, an acropolis known for its melange of mysticism, mystery and magic. Months later, it holds me in a magnetic grasp.

The hot wind of August blows dry in Istria, flinging dust devils to interrupt the sun. Motovun shimmers and undulates in the distance. It’s a medieval mirage, atop the hill the Venetians could only take by force instead of politics in the 13th century. Natalia has brought me here on a whirlwind of her own. As we careen through the countryside in her powerful black Mercedes, Natalia’s Croatian consonants scatter over me, tempered with the lilt of Italy. Anastasia rides shotgun, translating her mother. They’re proud that Venice had to work so hard to capture Motovun, the acropolis of Istria, one thousand and fifty two steps up a staircase to the sky. Motovun – the acropolis of Istria

Where other mortals set forth to begin the climb on foot, Natalia is waved on through. Our engine purrs as we pass, and I sink in my seat as we ascend, simultaneously guilty and grateful. It pays to know someone, as I’ve already learned this day. We’ve come from a visit with the finest winemaker in Istria. His malvasia still lingers on my taste buds in notes of acacia and pear.

Now we’ve arrived in mystical Motovun, the walled city in the clouds where ley lines intersect in a so-called dragon’s furrow of positive energy. Mysterious Motovun, where giants whose bones have recently been uncovered once walked among men. Mesmerizing Motovun, where we want to trade the taste of malvasia for the loamy white truffles of Istria, which are hunted with dogs and dug from the forest aside the River Mirna below, to be mixed with honey and cheese. Motovun – Medieval walled city in the center of Istria

“If you want to find the secrets of the universe, think in terms of energy, frequency and vibration.” – Nikola Tesla

“Can you feel anything?” asks Anastasia, looking around nervously, as if we’re embarrassing her. Arms outstretched, her mother and I are espaliered against the cool stucco exterior of the Church of St. Stephen’s. We each have one ear to the wall, listening spread-eagled for what we’re not sure, but something. New Age thinking holds Motovun is a significant crossroads of ley lines called a “dragon’s furrow,” and St. Stephen’s is built upon it. Ley lines, called dragon lines, fairy lines and dream lines across cultures worldwide from Celtic to aboriginal, are thought to be energetic meridians between holy places. Ley line theorists claim the ancients built their monuments along these conduits, with spiritual vortexes or psychic portals corresponding at their intersections. These intersections positively affect humans in their state of wellness and creative practices. I’d been introduced to the concept when we lived on Kaua’i, an island similarly rich in spirituality. Now I am on the opposite side of the globe and flabbergasted the subject of ley lines pops up again in a conversation I only partially understand. Is this a sign? Of what, then?

St. Stephen’s dates from the late Renaissance, but the water cisterns in front of it in the city’s main square are a couple hundred years older. We’ve arrived via a Fibonacci-like spiral from the base of the hill to the city’s main gate, where the Venetian lion’s book is closed, signifying the city was conquered by force. The church is said to be designed from 16th century sketches attributed to Palladio, whose name was given to him by his employer, the Humanist poet and scholar, Gian Giorgio Trissino. Trissino wanted his young protege to appreciate art, science and classical literature; “Palladio” means “wise one.” The ancient cisterns in the square

Widely considered, according to Wikipedia, to be the “single most influential individual in architecture throughout history,” Palladio’s designs incorporate classical symmetry, perspective and values harkening back to Roman temples. In his churches, two interlocking architectural orders can be seen, representing the hierarchy Catholicism assigns to divine and earthly worlds.

Surrounded by all this symbolic richness, Natalia and I strain for some sort of grounding, to feel a pulse, or perhaps a low-pitched hum signifying we share a universal connection with these elements. But there is nothing. Sheepishly, we lower our arms and laugh.

In Motovun, the medieval wall is now a pathway upon which you can walk the ancient city’s circumference. In the heat of the day, we amble slowly, taking in the views. 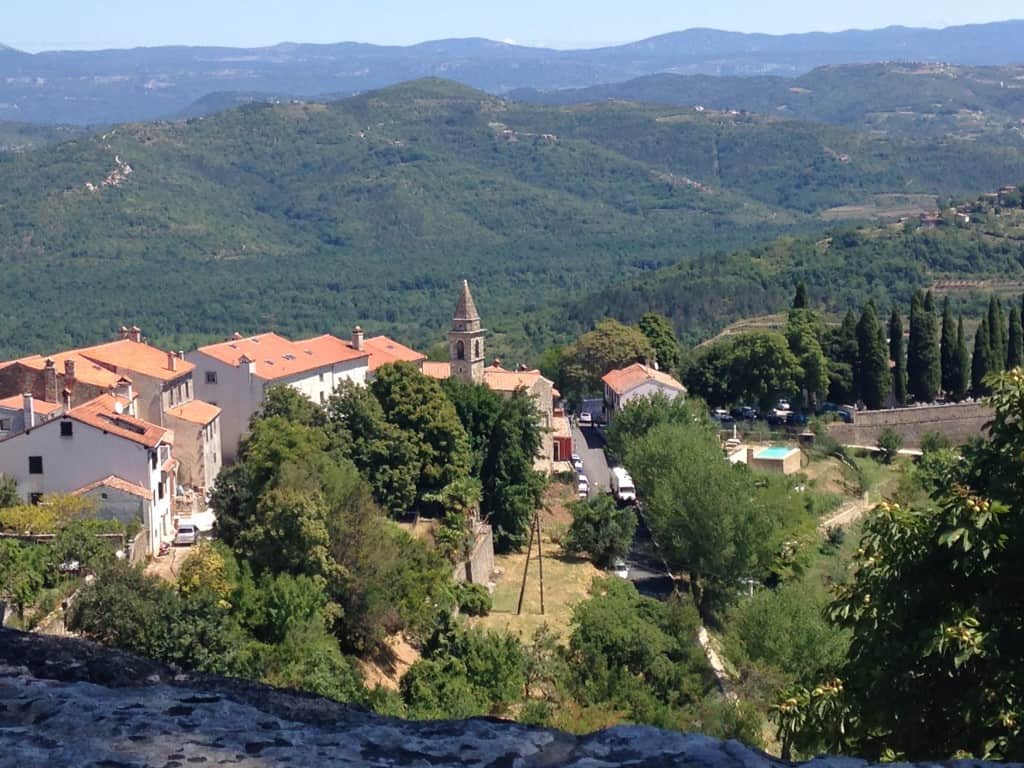 View of the new city and countryside from the wall Our pace is perfect for storytelling and the most famous story Motovun can boast is one revered in all of Croatia: the legend of Veli Joze. The story begins with traditional Croatian lore that many giants once lived among the little people, but eventually every locality poisoned theirs save for one. The town giant they kept would do heavy lifting, protect against bears and wolves, and farm their cropland. Motovun didn’t treat its giant, Veli Joze (“Big Joe”) very nicely. When he felt particularly disrespected, he would furiously shake the St. Stephen’s bell tower in an ear-splitting, retaliatory racket.

The story of Veli Joze was put in written form in 1908 by Croatian poet, Vladimir Nazor. Nazor, who fought as a partisan with Tito during WWII, is revered as a national hero: Croatia’s first post-war Parliamentary speaker and head of state. Veli Joze was seen as a symbol of the Croatian struggle against German and Italian nationalistic influences at the time it was written. Today, the tale of a gentle giant who railed against humiliation resonates as an allegory against oppression and enslavement. We turn on the top of the wall to look back on the tower, imagining Veli Joze silhouetted against the sky, ringing its bells in anger and anguish. Natalia points to an oversized effigy leaning rather casually on a whitewashed wall. “You know they’ve dug here and uncovered giants’ bones,” she tells me. It’s unclear in translation whether “here” means Istria or Motovun itself. We are looking at an open plot, marked by boundaries of stone. It’s easy to imagine this as Veli Joze’s resting place in the shadow of the bell tower. “It’s sad,” I say, thinking of other tales and allegories of the mistreated and misunderstood: Hugo’s Hunchback of Notre Dame, Beaumont’s Beauty and the Beast, Grimms’ Frog Prince. “Yes, but Veli Joze lives in our hearts,” says Anastasia. “So sad, yes, but maybe he’s happy we love him now.”

“The most learned men have been questioned as to the nature of this tuber, and after two thousand years of argument and discussion their answer is the same as it was on the first day: we do not know. The truffles themselves have been interrogated and have answered simply: eat us and praise the Lord.” – Alexandre Dumas (1802-1870)

Below the wall of Motovun are hillsides planted with vines. These give way to the banks of the River Mirna and the 4-mile square Motovun forest, which has just under 700 acres protected. While most of Istria is karst with little topsoil, the loam in this forest contains treasure. The black tartufe (truffle) and its rare white cousin thrive hidden deep in this ground, and the locals use specially-trained dogs to hunt them. Bronze replica of *the* truffle

It is said in the myth of Medea that Jason and the Argonauts traversed Istria on the Mirna via a subterranean passageway. Later, Venetian vessels sailed it from the sea past Motovun to Buzet. Thus, empires from Rome to Austria-Hungary, ancient to modern day, feasted on Istrian truffles. But in today’s truffle realm, a restauranteur claims the crown. It was here in the Motovun forest in 1999 that Giancarlo Zigante found the biggest truffle in the world. Ever. All 1.3 kilograms of it. Rightfully, a bronzed replica of this monster truffle is enshrined at Restaurant Zigante, in the crossroads of Livade below Motovun.

Zigante’s menu, entirely based on truffles, is served with old-school, white-gloved, understated flourish to gourmands from around the globe, pilgrims who have reached the Holy Grail of truffle-dom. The big truffle? Served to 100 guests in a promotional dinner. Just because you go tromping through muddy woods in your Wellies with your favorite truffle-hunting dog doesn’t mean you can’t be a good marketer. Some might say this is what makes you one.

Danijela Hodzic, the sales and marketing manager for Restaurant Zigante and its ancillary businesses, is waiting to oversee our tasting. Her operations include truffle hunting demos with the famous truffle dogs, tastings in two locations, factory tours, four-star rooms in a refurbished stone house adjacent to the restaurant, seasonal menus designed by award-winning chef Damir Modrusan, and a Truffles Days Fair and Exhibition event in the autumn of each year. Eagerly, we learn how truffles are transformed into traditional Istrian products. And we taste them: truffles in oils, truffles mixed with sheep’s milk cheese, truffle honey, truffle butter, minced black and white truffles. Each is more intoxicating than the last. The taste is unmistakeable, earthy and rich, alternating in intensity, rolling on our tastebuds in the sweet suspensions and textural blends for which Zigante is famous. Danijela and her assistant stand bemused as we argue good-naturedly which is best. It doesn’t matter. I want every kind of truffle product there is in this room. Black gold – the truffles of Istria

I load up without considering logistics. These truffles are so superb, I throw baggage overage potential to the wind, and select from glass jars filled with Zigante’s various truffle elixirs. I get the pot of truffle cheese, and the jar of truffle honey. I choose a large container of minced black truffles, and a tiny one of white (whose flavor is twice as strong). I grab a booklet of recipes, knowing full well it’s more likely we’ll just eat all this magic straight out of the jar. I want to taste this day again and again in these incomparable flavors. Truffle deliciousness for the tasting

At certain times of the year, as I am shown in photographs, Motovun becomes a city in the clouds, rising from a ring of fog like an apparition. Bell tower pointing toward the heavens, anchored in the mist, ancient legends of giants and dragons set within its walls, the citadel has a compelling magnetism even without the New Age vibration we listened and felt for in vain. Maybe, I think now with the clarity of distance, I didn’t have to actively seek the magic of Motovun at all. Instead, like Anastasia said of Veli Joze, it settles in the heart on its own. The mystique of Motovun still lingers these months later.

Top 10 Things To Do in Motovun, Croatia Your personal visit to Motovun and other Istria experiences can be arranged by Natalia Marcelja or one of her colleagues at Solen Travel Agency, Strossmayerova ul. 2, 51000 Rijeka Croatia. Tel. +385 51 371 587. Email solen@solen.hr.